Write music in vim or your favorite text editor. 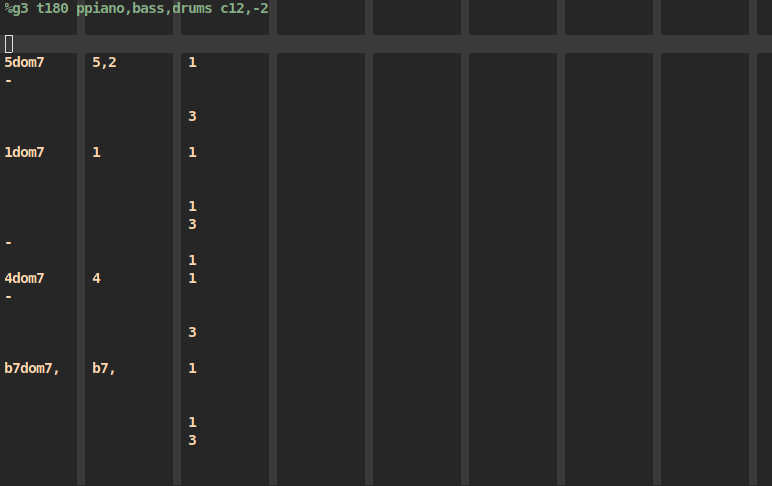 This project is still very new. Despite number of features, you may quickly run into issues, especially with editor integration.

Compose music in a plaintext format or type music directly in the shell. The format is vertical and column-based, similar to early music trackers, but with syntax inspired by jazz/music theory.

Textbeat is still in development, but you can already do lots of cool things:

Once you're in textbeat, try this:

If you don't hear 3 notes, you need to set up midi (this is the case with Linux).

How to set up midi

You can use the shell with General Midi out-of-the-box on windows, which is great for learning, but sounds bad without a decent soundfont.

If you want to use VST instruments, you'll need to route the MIDI out to something that hosts them, like a DAW. (I'm currently working on headless VST rack generation.)

For windows, you can use a virtual midi driver, such as loopMIDI for usage with a VST host or DAW.

If you're on Linux, you can use soundfonts through qsynth or use a software instrument like helm or dexed. I recommend qsynth.

VSTs should work here as well but you need to pick a host.

If you feed the MIDI into a DAW you'll be able to record the output through the DAW itself.

I'm currently looking into export options and recording via a headless host.

If you're familiar with trackers, you may pick this up quite easily. Music flows vertically, with separate columns that are separated by whitespace or manually setting a column width.

Each column represents a track, which defaults to separate midi channel numbers. Tracks play sequences of notes. You'll usually play at least 1 track per instrument. This doesn't mean you're limited to just one note per track though, you can keep notes held down and play chords as you wish.

Each cell row in a track can contain both note data and associated effects.

By default, any note event in a track will mute previous notes on that track

The tempo is in BPM, and the grid is based in subdivisions. Musicians can think of grid as fractions of quarter note, The grid is the beat/quarter-note subdivision.

Both Tempo and Grid can be decimal numbers as well.

Both note numbers and letters are supported. This tutorial will use 1,2,3,4,5,6,7 instead of C,D,E,F,G,A,B. I'm a fan of thinking about notes without implying a key. For this reason, textbeat prefers the relative/transposed note numbers over arbitrary note names. If you're writing a song in D minor, you may choose to set the global or track key to D, making D note 1. (You could also set D to 6 if you're thinking modally) If this is confusing or not beneficial to you: don't worry, it's optional!

In this format, flats and sharps are prefixed instead of suffixed (b7 ("flat 7") instead of Bb ("B flat")).

Be aware that this flexibility introduces a few limits with chord names:

In the first example, the apostrophe character (') was used to play the note in the next octave. For an octave below, use a comma (,).

To make octave changes persist, use a number for the octave count instead of repeating (,2).

Notes will continue playing automatically, until they're muted or another note is played in the same track.

You can mute all notes in a track with -

To control releasing of notes, use dash (-).

Note durations can be manually controlled by adding * to increase value by powers of two, You can also add a fractional value to multiply this. These types of fraction values are used throughout textbeat. The opposite of this is the dot (.) which halves note values

Now with dots for staccato:

Notes that are played in the same track as other notes mute the previous notes. In order to overide this, hold a note by suffixing it with underscore (_).

A (-) character will then mute them all.

If you want to hold a series of notes like a sustain pedal, simply use two underscores (__) and all future notes will be held until a mute is received.

Let's play a scale with some chords:

There are lots of chords and voicings (check def/ files) and I'll be adding a lot more. All scales and modes are usable as chords, so arpeggiation and strumming is usable with those as well.

Chords can be walked if they are suffixed by '&' Be sure to rest in your song long enough to hear it cycle.

After the &, you can put a number to denote the number of cycles. By default, it cycles infinitely until muted (or until the song ends)

The dollar sign is similar, but walks an entire set of notes within a single grid space:

Scales and modes are also accessible the same way:

To strum, use the hold (_) symbol with this.

Use a ! or ? to accent or soften a note respectively.

You can use these on arpeggios as well.

Use values after accent to set a specific velocity:

For readability, notes can be indented to imply downbeat or grouping

If you wish to control volume/gain directly, use @v

Interpolation is not yet impl

In the future, articulation will be programmable, per-track or per-song.

Notes of arpeggios can be modified as they're running, by having effects in the grid space they occur, for example:

maj7& starts a repeating 4-note arpeggio, and we indent to show this.

Certain notes of the sequence are modulated with short/staccato '.', soft '?', and accent '!'

For staccato usage w/o a note name, an extra dot is required since '.' is simply a placeholder.

Columns are separate tracks, line them up for more than one instrument.

The dots are placeholders.

Columns can be detected (in some cases), but you'll probably want to specify the column width manually at the top, which allows vim to mark the columns.

For best view in an editor, it is recommended that you offset the first column by -2:

Another useful global var is 'p', which sets midi patches by name or number across the tracks. The midi names support both patch numbers and partial case-insensitive matches of GM instruments.

For a full list of GM names, see def/gm.yaml.

The 'T' (tuplet) gives us access to the musical concept of tuplets (called triplets in cases of 3). which allows note timing and durations to fall along a ratio instead of the usual note subdivisions.

Tuplets are marked by 'T' and have an optional value at the first occurence in that group. Ratios provided will control expansion. Default is 3:4. If no denominator is given, it will default to the next power of two (so 3:4, 5:8, 7:8, 11:16). So in other words, T5 is the same as T5:8, but if you need a 5:6, you'll need to write T5:6. The ratio of the tuplet persists for the rest of the grouping. For nested tripets, group those by adding an extra 'T'.

The two tracks below are a basic usage of triplets:

Even though there is visual spacing between the triplet groups, the 'T' value effective stretches the notes so they occur along a slower grid according to that ratio.

The spaces that occur after (and between) tuplet groupings should remain empty, since they are spacers to make the expansion line up.

In textbeat, slash (/) chords do not imply inversions, but are for spanning chord voicings across octaves. Additionally, note names alone do no imply chords. For example, C/E means play a C note with an E in a lower octave, whereas a musician might interpret this as a specific chord voicing. Inversions in textbeat uses shift operator (>) instead (maj> for maj first inversion))

The above chord voicing spans 3 octaves and contains 9 notes. It is a Bbmaj7 chord w/ an added #4 (relative to Bb, which is E), followed by a lower octave Csus2. Then at the bottom, there is a C bass note.

Check out the examples/ folder. Play them with textbeat from the command line:

Here are the marker/repeat commands:

A majority of the music index is contained in inside these files:

These lists does not include certain chord modifications (add, no, drop, etc.).

You may notice there are some incomplete module/plugin systems for integration with different sound outputs and instruments hosts. These plugins are not yet functional.

I'm improving this faster than I'm documenting it. Because of that, not everything is explained.

Check out the project board for more information on current/upcoming features.

Also, check out the basic examples in the examples/ and tests/ folder.

Not everything is listed here because I just started this project. More to come soon!

I'll be making use of python's multiprocessing or separate processes to achieve as much as I can do for timing critical stuff without doing a C++ rewrite.