MTJ is a high-performance library for developing linear algebra applications.

MTJ uses the netlib-java project as a backend, which will automatically use machine-optimised natives, if they are available. Please read the netlib-java documentation for the extra steps needed to ensure that you are getting the best performance for your system.

For more details on high performance linear algebra on the JVM, please watch my talk at Scala eXchange 2014 (follow along with high-res slides).

Performance to Other Libraries

The java-matrix-benchmark clearly shows MTJ to be the most performant Java library for large matrices: 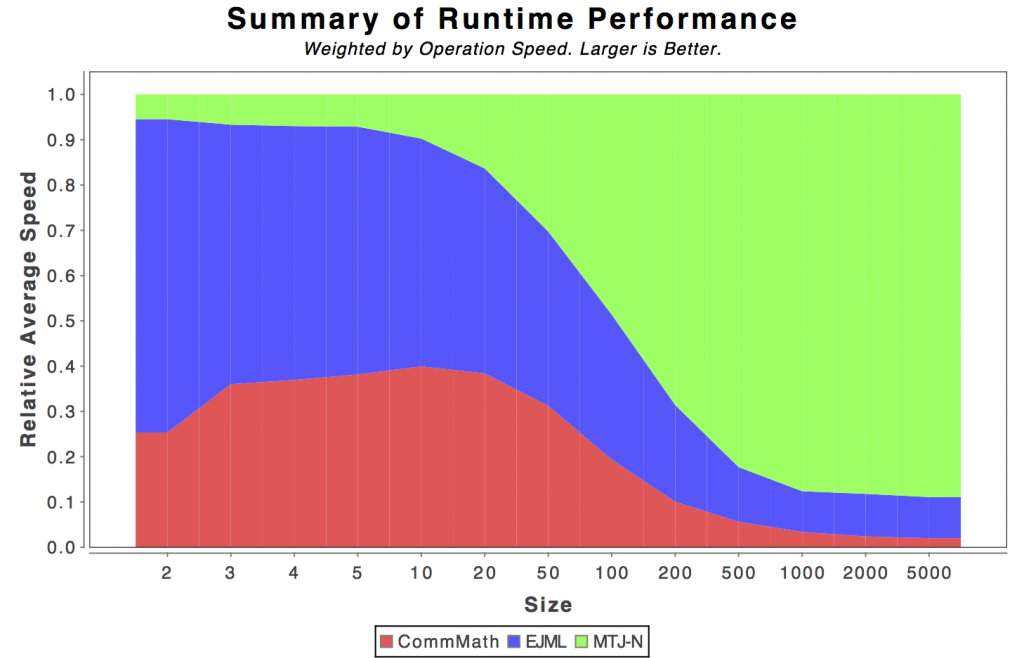 We recommend common-math for small matrix requirements as it provides a large variety of mathematics features, and EJML if performance on small matrices is more important than features.

A variety of sparse matrix / vector storage classes are available:

The LinkedSparseMatrix storage type is a novel storage type developed under this project. It maintains two tail links, one for the next matrix element by row order and another by column order. Lookups are kept into each row and column, making multiplication and transpose multiplication very fast.

The following charts compare the LinkedSparseMatrix against DenseMatrix for increasing matrix size (n x n) and number of non-zero elements, m. Rainbow lines indicate m varied from 10,000 to 100,000. Solid lines are for dense matrix, dashed lines are the sparse matrix.

The following is time to initialise the matrix: 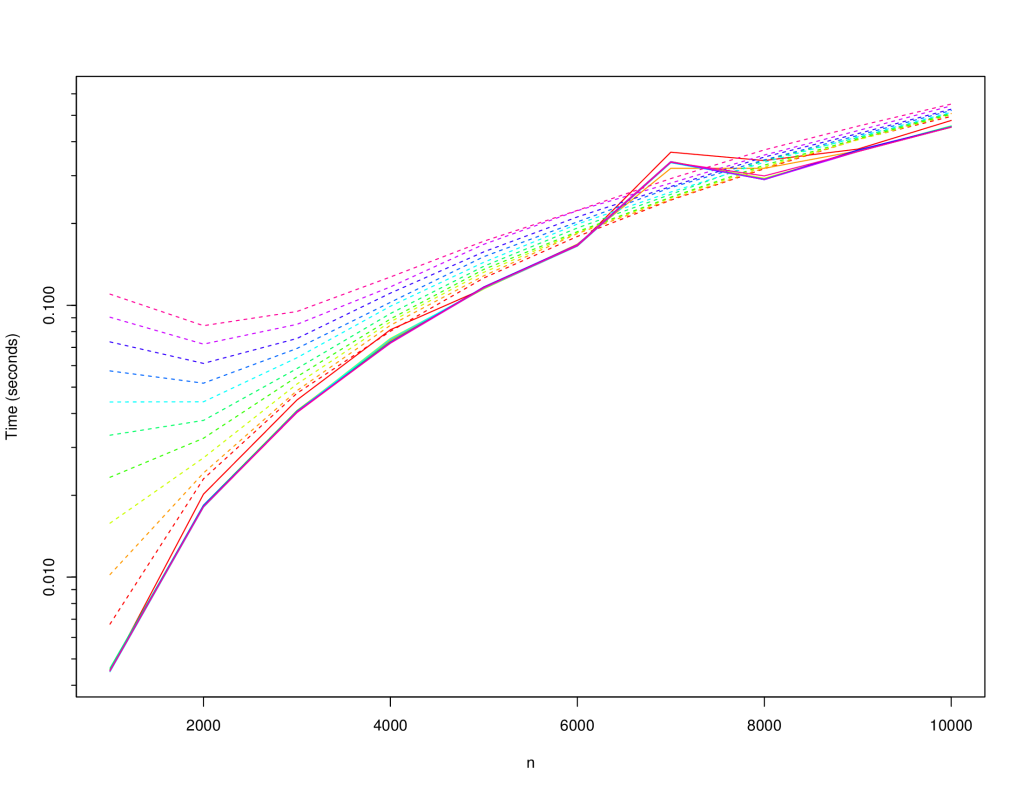 The following is the memory consumption: 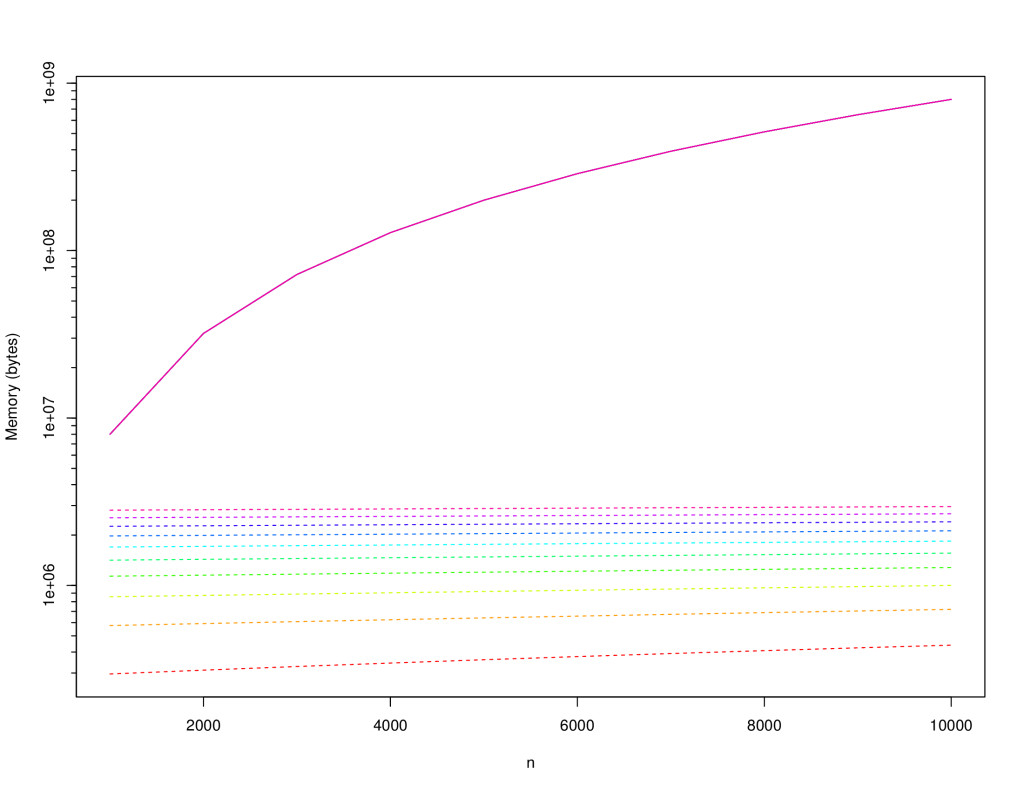 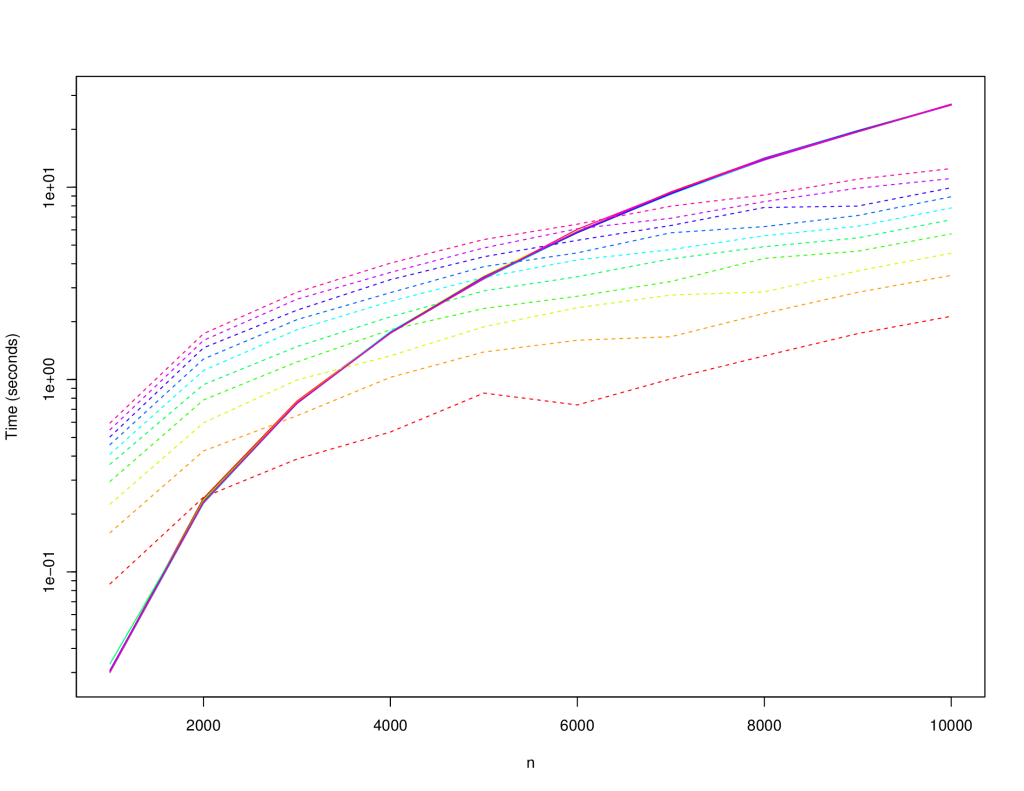 In addition, implementations of the netlib Templates are available in the no.uib.cipr.matrix.sparse package.

Users may wish to look at Sparse Eigensolvers for Java for another solver.

This project was originally written by Bjørn-Ove Heimsund, who has taken a step back due to other commitments.

Releases are distributed on Maven central:

Unofficial single-jar builds may be available from java-matrix-benchmark for laggards who don't have 5 minutes to learn Maven.

Snapshots may be distributed on Sonatype's Snapshot Repository (if you submit a pull request, a build will appear here when it is merged):

Contributors are encouraged to fork this repository and issue pull requests. Contributors implicitly agree to assign an unrestricted licence to Sam Halliday, but retain the copyright of their code (this means we both have the freedom to update the licence for those contributions).