Data is displayed in a view which can be edited and saved. The interface can be translated with resource/external text files so that different languages can be supported.

Pokémon Showdown sets and QR codes can be imported/exported to assist in sharing.

PKHeX expects save files that are not encrypted with console-specific keys. Use a savedata manager to import and export savedata from the console (Checkpoint, save_manager, JKSM, or SaveDataFiler).

We do not support or condone cheating at the expense of others. Do not use significantly hacked Pokémon in battle or in trades with those who are unaware hacked Pokémon are in use. 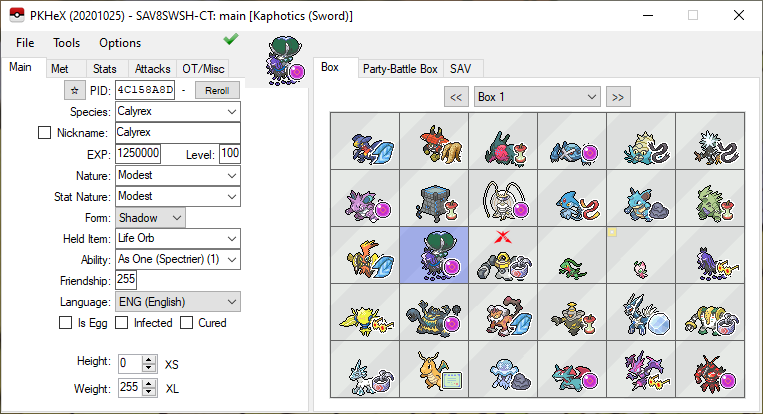 PKHeX is a Windows Forms application which requires .NET Framework v4.6, with experimental support for .NET 5.0.

The executable can be built with any compiler that supports C# 8.

Use the Debug or Release build configurations when building. There isn't any platform specific code to worry about!

PKHeX's QR code generation code is taken from QRCoder, which is licensed under the MIT license.

PKHeX's shiny sprite collection is taken from pokesprite, which is licensed under the MIT license.

PKHeX can be opened with IDEs such as Visual Studio by opening the .sln or .csproj file.

GNU/Linux is not the main Operating System of developers of this program so there may be bugs; some may come from non GNU/Linux specific code of Mono/Wine, so other users may not be able to reproduce the error you are experiencing.