HelenOS is a portable microkernel-based multiserver operating system designed and implemented from scratch. It decomposes key operating system functionality such as file systems, networking, device drivers and graphical user interface into a collection of fine-grained user space components that interact with each other via message passing. A failure or crash of one component does not directly harm others. HelenOS is therefore flexible, modular, extensible, fault tolerant and easy to understand. 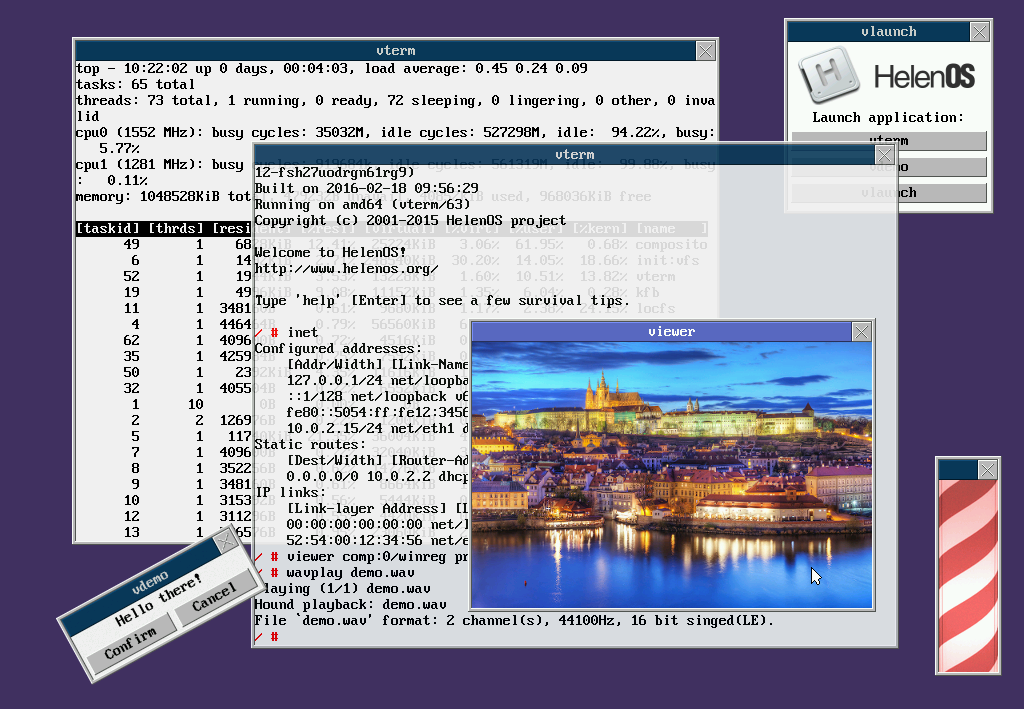 HelenOS aims to be compatible with the C11 and C++14 standards, but does not aspire to be a clone of any existing operating system and trades compatibility with legacy APIs for cleaner design. Most of HelenOS components have been made to order specifically for HelenOS so that its essential parts can stay free of adaptation layers, glue code, franken-components and the maintenance burden incurred by them.

In order to build HelenOS, one must first build the cross-compiler toolchain (either as a root or by specifying the CROSS_PREFIX environment variable) by running (example for the amd64 architecture, further list of targets can be found in the default directory):

The toolchain script will print a list of software packages that are required for the toolchain to correctly build. Make sure you install all the dependencies. Unfortunately, the script cannot install the required dependencies for you automatically since the host environments are very diverse. In case the compilation of the toolchain fails half way through, try to analyze the error message(s), add appropriate missing dependencies and try again.

As an example, here are some of the packages you will need for Ubuntu 16.04:

Whereas for CentOS/Fedora, you will need:

Since the summer of 2019, HelenOS uses the Meson build system. Make sure you have a recent-enough version of Meson and Ninja. The safest bet is installing both using pip3 tool.

Meson does not support in-tree builds, so you have to create a directory for your build. You can have as many build directories as you want, each with its own configuration. cd into your build directory and run configure.sh script which exists in the source root. configure.sh can be run with a profile name, to use one of the predefined profiles, or without arguments for interactive configuration.

Note: If you installed the toolchain to a custom directory, make sure CROSS_PREFIX environment variable is correctly set.

Once configuration is finished, use ninja to build HelenOS. Invoking ninja without arguments builds all binaries and debug files, but not bootable image. This is because during development, most builds are incremental and only meant to check that code builds properly. In this case, the time-consuming process of creating a boot image is not useful and takes most time. This behavior might change in the future.

When you get the command line back, there should be an image.iso file in the build root directory. If you have QEMU, you should be able to start HelenOS by running:

HelenOS is open source, free software. Its source code is available under the BSD license. Some third-party components are licensed under GPL.