PyRhO is a Python module to fit, characterise and simulate (rhod)opsin photocurrents.

Optogenetics has become a key tool for understanding the function of neural circuits and controlling their behaviour. An array of directly light driven opsins have been genetically isolated from several families of organisms, with a wide range of temporal and spectral properties. In order to characterize, understand and apply these rhodopsins, we present an integrated suite of open-source, multi-scale computational tools called PyRhO.

The module is written in Python with an additional IPython/Jupyter notebook based GUI, allowing models to be fit, simulations to be run and results to be shared through simply interacting with a webpage. The seamless integration of model fitting algorithms with simulation environments for these virtual opsins (including NEURON and Brian2) will enable (neuro)scientists to gain a comprehensive understanding of their behaviour and rapidly identify the most suitable variant for application in a particular biological system. This process may thereby guide not only experimental design and opsin choice but also alterations of the rhodopsin genetic code in a neuro-engineering feed-back loop. In this way, we hope PyRhO will help to significantly improve optogenetics as a tool for transforming biological sciences.

PyRhO is composed of several abstraction layers, including the Model layer, Protocol layer and Simulator layer (shown in the architectural schematic below). Choices in each layer are independent or one another, giving a large number of possible combinations to suit many needs for in silico experiments. Additionally, parameters may be fit to each type of kinetic model from experimental data or loaded from the default options of popular opsins. 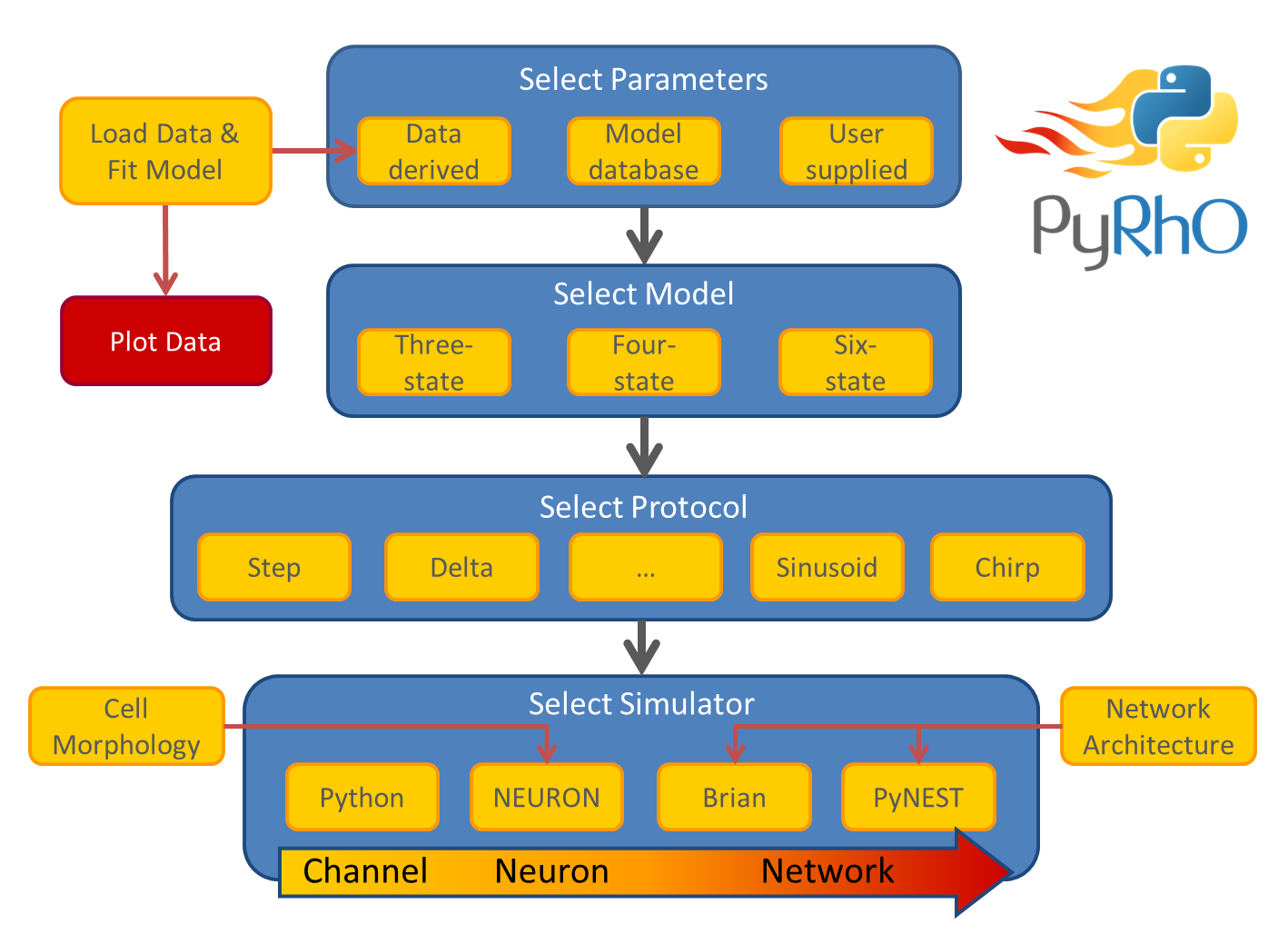 If you would like to try PyRhO before installing it, go to try.projectpyrho.org to launch a fully configured Jupyter notebook in your browser.

If you wish to use PyRhO in a Docker container, a Dockerfile is provided in the accompanying Prometheus repository: https://github.com/ProjectPyRhO/Prometheus

The Dockerfile will build a full installation including the NEURON and Brian2 simulators and the Jupyter notebook GUI. See the repository's README file for instructions.

To install PyRhO (including the GUI) from PyPI use the command: :

Alternatively, to install the latest code from GitHub (including the GUI) use the command: :

This will attempt to compile NEURON from source, copy the supplied mod and hoc files into place (the current working directory by default) finally compiling the mod files describing the opsin models ready for inclusion in simulations.

The Brian simulator is included with the PyRhO installation for modelling networks of optogenetically transfected spiking neurons.

If you use PyRhO please cite our paper:

The PyRhO project website with additional documentation may be found here: www.imperial.ac.uk/bio-modelling/pyrho