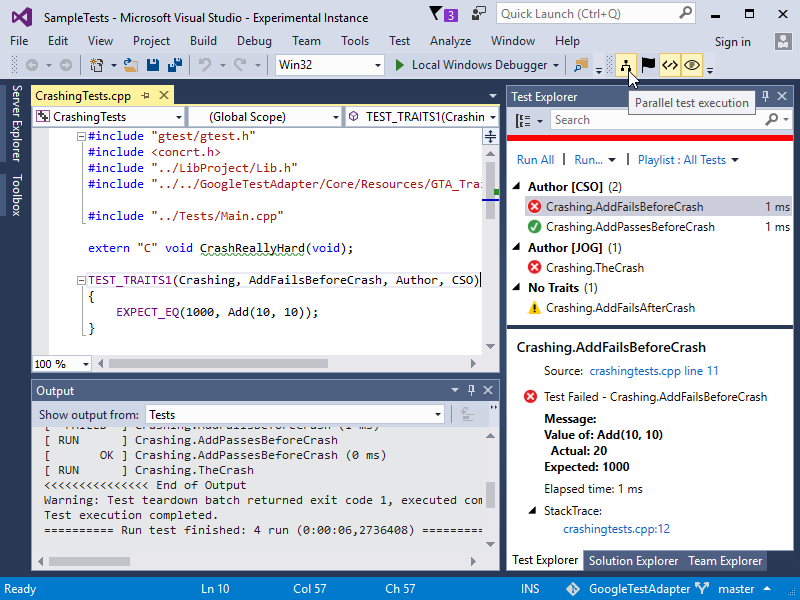 In the last couple of months, I noticed that my private laptop certainly has a finite lifetime. Thinking about the requirements a new one has to stand up to, I realized that developing and supporting Google Test Adapter has in the last years been one of the major use cases of that laptop. Thus, I decided to take this as reason for from now on accepting donations :-)

Update: In the meantime, I have received a few donations, and some rather generous ones (thanks again to everybody - the new laptop is great :-) ), but since I'm still quite far away from my original donation goal of collecting half of the laptop's price, I will leave this section as is.

Therefore, if you would like to appreciate development and support of Google Test Adapter, please consider to donate!

Please note that I will see your donations as appreciation of my work so far and a motivational factor for the future, but just to be sure, they do not result in any obligations on my part (e.g. prioritized support, your favorite feature, or even continued maintenance).

Google Test Adapter can be installed in three ways:

After restarting VS, your tests will be displayed in the Test Explorer at build completion time. If no or not all tests show up, have a look at the trouble shooting section.

Note that due to Microsoft requiring VS extensions to support asynchronous package loading, the last version of Google Test Adapter which supports Visual Studio 2012 is 0.14.4.

The format of solution and user settings files is the same: a <GoogleTestAdapterSettings> node contains the solution settings and the (possibly empty) set of project settings and is itself contained in a <RunSettings> node (which in the case of user settings files might contain additional, e.g. VS specific settings). In contrast to solution settings, each set of project settings additionally has a regular expression to be evaluated at test discovery and execution time.

The final settings to be used are computed by merging the available settings, vaguely following Visual Studio's approach of configuration inheritance. Merging is done in two stages:

Overall, given a test executable mytests.exe, the following settings apply to that executable in decreasing priority:

Note that due to the overriding hierarchy described above, you probably want to provide only a subset of the nodes in your configuration files. For instance, providing the node <DebugMode>true</DebugMode> in a shared solution settings file will make sure that all sharing developers will run GTA with debug output, no matter what the developer's individual settings at Tools/Options/Google Test Adapter are (and unless the developer has selected a test settings file via VS, which would override the solution setting).

GTA does not provide direct access to VS project settings such as Project > Properties > Debugging > Environment. Additionally, when run as NuGet dependency, GTA does not have access to information such as solution dir or Platform/Configuration a test executable has been built with.

To overcome these problems, GTA supports so-called settings helper files which provide that information to GTA. Helper files are usually generated as part of the build, e.g. within a post-build event, which might look like this:

This command generates a file $(TargetPath).gta_settings_helper (where $(TargetPath) is the path of the final test executable) containing key/value pairs separated by ::GTA::. At file generation time, the VS macros will be replaced by the actual values, which can then in turn be used as placeholders within the GTA settings. In particular, the helper file generated by the above command will

Note that the settings helper files need to be located within the same folder as their corresponding test executable, and must have the test executable's name concatenated with the .gta_settings_helper ending (make sure to ignore these files in version control if necessary).

GTA has full support for traits, which can be assigned to tests in two ways:

More precisely, traits are assigned to tests in three phases:

A couple of tokens can used as part of a test executable's output; if GTA sees theses tokens, it will act accordingly:

Note that a test executable might be run more than once by GTA (e.g., if tests are run in parallel, or if the selection of tests to be run results in command lines too long for a single test run). In this case, the exit codes and respective outputs of a test exectutable are aggregated as follows:

An example usage of the Exit code test case can be found as part of the SampleTests solution: Project MemoryLeakTests makes use of MS' memory leak detection facilities and reports the results to VS via an exit code test. The approach can easily be re-used for other Google Test projects:

However, note that Google Test as of V1.8.1 uses some memory allocation which is recognized by MS' leak detection mechanism as a leak (although it isn't), in particular for failing assertions. Some of these "false positives" have been fixed with the linked issue, making leak detection useful as long as all tests are green; however, and until this problem is fixed, the memory leak detection provided by GTA will result in a skipped exit code test in case RUN_ALL_TESTS() does not return 0, but will report the leak in the test's error message. If you run into such problems, please report them against the Google Test repository if appropriate.

GTA can be used to run tests from the command line, which can be done making use of VS's VSTest.Console.exe. GTA supports all the tool's command line options, including /UseVsixExtensions and /TestAdapterPath.

Note, however, that VSTest.Console.exe will not make use of GTA solution settings (if the solution containing the tests happens to use such settings). All settings to be used by VSTest.Console.exe need to be passed using the /Settings command line option. Note also that the $(SolutionDir) placeholder is neither available in the Test setup/teardown batch file options nor in the Additional test execution parameters option.

The tests to be run can be selected via the /TestCaseFilter option. Filters need to follow the syntax as described in this blog entry. GTA supports the following test properties:

Additionally, traits can be used in test case filters. E.g., all tests having a Duration of short can be executed by means of the filter /TestCaseFilter:"Duration=short".

GTA remembers the durations of the executed tests to improve test scheduling for later test runs. The durations are stored in files with endings .gta.testdurations - make sure your version control system ignores these files.

Note that since VS 2015 update 1, VS allows for the parallel execution of tests (again); since update 2, Test Explorer has an own Run tests in parallel button, and VsTest.Console.exe suppports a new command line option /Parallel. Neither button nor command line option has any effect on test execution with GTA.

If you need to perform some setup or teardown tasks in addition to the setup/teardown methods of your test code, you can do so by configuring test setup/teardown batch files, to which you can pass several values such as solution directory or test directory for exclusive usage of the tests.

For technical reasons, not all features are available in all environments by default; refer to the table below for details.

None or not all of my tests show up

In general, you can identify issues with your test executables by debugging them within VS: make the according test project the startup project of your solution, add command line arguments as desired, place breakpoints at points of interest and launch your test executable with F5.

No source locations and traits are found for my tests

Test discovery is slow/does not seem to finish

You might consider using GTA's project settings to switch off symbol parsing and binary scanning for problematic test executables only, thus compromising between speed of test discovery and build maintainability.

The Test Explorer window can not be opened after installing GTA

Please refer to our wiki.

Google Test Adapter is written and maintained by Christian Soltenborn.

The first version of GTA was a slightly enhanced C# port of the F# Google Test Runner, written by Markus Lindqvist. We have also learned a lot from the JavaScript test runner Chutzpah, written by Matthew Manela.

GTA has benefited from all kinds of contributions, be it feature requests, bug reports, code snippets, testing of new features and bugfixes, or even pull requests: