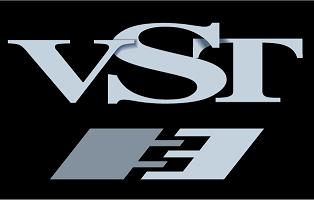 The full VST 3 SDK is available here!. It contains :

About VST plug-ins in general

A VST plug-in is an audio processing component that is utilized within a host application. This host application provides the audio or/and event streams that are processed by the plug-in's code. Generally speaking, a VST plug-in can take a stream of audio data, apply a process to the audio, and return the result to the host application. A VST Plug-in performs its process normally using the processor of the computer. The audio stream is broken down into a series of blocks. The host supplies the blocks in sequence. The host and its current environment control the block-size. The VST Plug-in maintains the status of all its own parameters relating to the running process: The host does not maintain any information about what the Plug-in did with the last block of data it processed.

From the host application's point of view, a VST plug-in is a black box with an arbitrary number of inputs, outputs (Event (MIDI) or Audio), and associated parameters. The host needs no implicit knowledge of the plug-in's process to be able to use it. The Plug-in process can use whatever parameters it wishes, internally to the process, but depending on the capabilities of the host, it can allow the changes to user parameters to be automated by the host.

The source code of a VST plug-in is platform independent, but the delivery system depends on the platform architecture:

To learn more about VST you can:

VST 3 is a general rework of the long-serving VST plug-in interface. It is not compatible with the older VST versions, but it includes some new features and possibilities. We have redesigned the API to make it not only far easier and more reliable for developers to work with, but have also provided completely new possibilities for plug-ins. These include:

1. Improved Performance with the Silence Flag

Processing can optionally be applied to plug-ins only when audio signals are present on their respective inputs, so VST 3 plug-ins can apply their processing economically and only when it is needed.

VST 3 plug-ins are no longer limited to a fixed number of inputs and outputs, and their I/O configuration can dynamically adapt to the channel configuration. Side-chains are also very easily realizable. This includes the possibility to deactivate unused busses after loading and even reactivate those when needed. This cleans up the mixer and further helps to reduce CPU load.

The VST 3 plug-in parameters are displayed in a tree structure. Parameters are grouped into sections which represent the structure of the plug-in. plug-ins can communicate their internal structure for the purpose of overview, but also for some associated functionality (eg. program-lists).

VST 3 defines a way to allow resizing of the plug-in editor by a user.

The host could ask the plug-in which parameter is under the mouse.

VST 3 defines a way to allow the host to add its own entries in the plug-in context menu of a specific parameter.

A VST 3 plug-in could access some channel information where it is instantiated: name, color,...

VST 3 defines with Note Expression a new way of event controller editing. The plug-in is able to break free from the limitations of MIDI controller events by providing access to new VST 3 controller events that circumvent the laws of MIDI and provide articulation information for each individual note (event) in a polyphonic arrangement according to its noteId.

VST 3 plug-in library could export multiple plug-ins and in this way replaces the shell concept of VST 2 (kPlugCategShell).

VST 3 plug-in can deliver a specific parameter mapping for remote controls like Nuage.

While designing VST 3, we performed a careful analysis of the existing functionality of VST and rewrote the interfaces from scratch. In doing so, we focused a lot on providing clear interfaces and their documentation in order to avoid usage errors from the deepest possible layer. Some more features implemented specifically for developers include:

How to build VST3

Get the source code from GitHub

Build the examples on Linux

Build the examples on macOS

Build the examples on Windows

More details are found at www.steinberg.net/sdklicenses_vst3