A set of playing cards in SVG, now also with a rendering in PNG and installable via NPM. 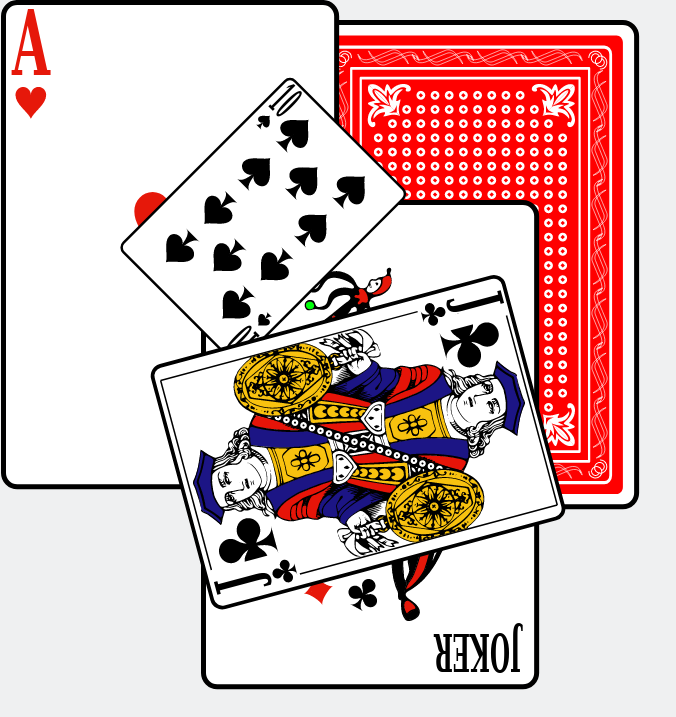 SVG-cards is a fork of SVG-cards 2.0.1, which was created by David Bellot. He writes in the README of the original package:

This is a set of playing cards made in pure SVG with all kings, queens, jacks, numbers, jokers and backs of cards. This set of SVG files is intended to be used in games, figures, illustrations, web sites as long as you provide the code source and the LGPL license (see the COPYING file). Although this is a free software, the license is the LGPL so you can use this set of cards even in a non-free software.

The kings, queens and jacks are based on the French representation, because I find them beautiful. You can access to each either by rendering the file into a pixmap and clipping each card or by using their name with a DOM interface.

I agree with David that these cards are beautiful! I am grateful for his work and that he published them under an open source license. However, while playing around with the SVG file containing the cards, I found that using the cards in SVG was not as straightforward as I would have liked. For example, I expected the following line,

SVG-cards is just an SVG file. You use it like you would any other SVG file. See MDN's documentation about SVG to learn about SVG.

I have also added a nicely formatted SVG file, svg-cards-indented.svg, which makes the SVG file easier to inspect using a text editor. Converting from indented to unindented version goes via xmllint:

To automatically convert these SVG files to PNG I developed a separate project: svg-cards-to-png. For convenience, this repository contains PNG files in the png subdirectory. In the two directories png/1x and png/2x you find PNG files of the SVG cards with, respectively, their natural dimensions and twice their natural dimensions. Furthermore, these PNG files come with 16 different colored back cards.

desphilboy has made this project into an NPM package to make it easier for web developers to use it in their projects. Now it can be installed and used like other dependencies:

In July 2018, Thomas Linard improved the SVG files by making them compliant with the SVG specification.