An integrated shell for working with the AWS CLI.

aws-shell - The interactive productivity booster for the AWS CLI

The aws-shell requires python and pip to install. You can install the aws-shell using pip:

If you are not installing into a virtualenv you can run:

Mac OS X (10.11 El Capitan) users: There is a known issue with Apple and its included python package dependencies (more info at https://github.com/pypa/pip/issues/3165). We are investigating ways to fix this issue but in the meantime, to install the aws-shell, you can run: sudo pip install aws-shell --upgrade --ignore-installed six

Once you've installed the aws-shell, you can now run:

To exit the shell, press Ctrl-D.

If you want to upgrade to the latest version of the aws-shell, you can run:

The aws-shell works on the same python versions supported by the AWS CLI:

The aws-shell uses the same configuration settings as the AWS CLI. If you've never used the AWS CLI before, the easiest way to get started is to run the configure command:

For more information about configure settings, see the AWS CLI Getting Started Guide.

The aws-shell accepts the same commands as the AWS CLI, except you don't need to provide the aws prefix. For example, here are a few commands you can try:

The aws-shell supports AWS CLI profiles. You have two options to use profiles. First, you can provide a profile when you start the aws-shell:

When you do this all the server side completion as well as CLI commands you run will automatically use the prod profile.

You can also change the current profile while you're in the aws-shell:

You can also check what profile you've configured in the aws-shell using:

After changing your profile using the .profile dot command, all server side completion as well as CLI commands will automatically use the new profile you've configured.

Auto Completion of Commands and Options

The aws-shell provides auto completion of commands and options as you type. 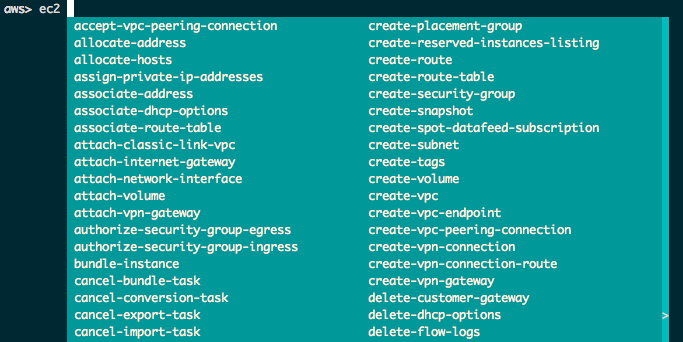 The aws-shell can also fill in an example of the shorthand syntax used for various AWS CLI options:

This feature is under active development. The list of supported resources continues to grow.

Every auto completion value supports fuzzy searching. This enables you to specify the commands, options, and values you want to run with even less typing. You can try typing:

The aws-shell supports Fish-style auto-suggestions. Use the right arrow key to complete a suggestion.

The aws-shell records the commands you run and writes them to ~/.aws/shell/history. You can use the up and down arrow keys to scroll through your history. 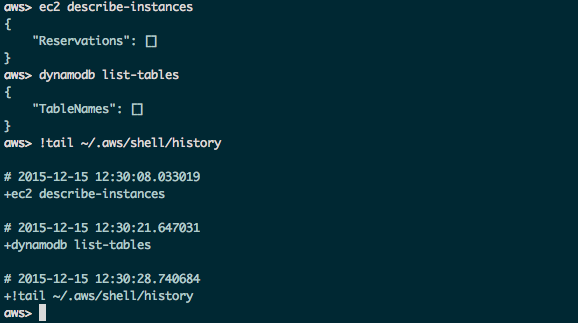 The aws-shell has a bottom toolbar that provides several options:

The aws-shell provides additional commands specific to the aws-shell. The commands are available by adding the . prefix before a command.

You can run the .exit or .quit commands to exit the shell.

You can run the .edit command to open all these commands in an editor. The aws-shell will use the EDITOR environment variable before defaulting to notepad on Windows and vi on other platforms.

You can change the current AWS CLI profile used by the aws-shell by using the .profile dot command. If you run the .profile command with no arguments, the currently configured shell profile will be printed.

You can change the current working directory of the aws-shell by using the .cd command:

The aws-shell integrates with other commands in several ways. First, you can pipe AWS CLI commands to other processes as well as redirect output to a file:

Second, if you want to run a shell command rather than an AWS CLI command, you can add the ! prefix to your command:

The aws-shell is currently in developer preview. We welcome feedback, feature requests, and bug reports. There may be backwards incompatible changes made in order to respond to customer feedback as we continue to iterate on the aws-shell.

Below are miscellaneous links for more information:

An integrated shell for working with the AWS CLI.