Implementation of inkle's Ink in pure GDScript, with editor support.

Note: While the implementation of the runtime is feature-complete and passes the test suite, you may still encounter some weird behaviors and bugs that will need to be ironed out. The runtime is not yet considered production ready, but it's almost there.

If you need help with something in particular, open up an issue on this repository.

If you want to contribute, be sure to take a look at the contributing guide.

inkgd is available through the official Godot Asset Library.

You can also download an archive and install inkgd manually. Head over to the releases, and download the latest version. Then extract the downloaded zip and place the inkgd directory into the addons directory of your project. If you don't have an addons directory at the root of the project, you'll have to create one first.

The GDScript API is mostly compatible with the original C# one. It's a good idea to take a look at the original documentation.

Additionally, feel free to take a look in the example/ directory and run ink_runner.tscn, which will play The Intercept.

Differences with the C# API

There are subtle differences between the original C# runtime and the GDScript version.

Since GDScript doesn't support static properties, any static property was moved into a singleton node called __InkRuntime which needs to be added to the root object current tree before starting the story.

Note that the tree is locked during notification calls (_ready, _enter_tree, _exit_tree), so you will need to defer the calls adding/removing the runtime node.

3. Getting and setting variables

Since the [] operator can't be overloaded in GDScript, simple get and set calls replace it.

The event / delegate mechanism found in C# is translated into a signal-based logic in the GDScript runtime.

The event / delegate mechanism found in C# is again translated into a signal-based logic.

6. Getting the ouput of evaluate_function

evaluate_function evaluates an ink function from GDScript. Since it's not possible to have in-out variables in GDScript, if you want to retrieve the text output of the function, you need to pass true to return_text_output. evaluate_function will then return a dictionary containing both the return value and the outputed text.

For bigger stories, loading the compiled story into the runtime can take a long time (more than a second). To avoid blocking the main thread, you may want to load the story from a background thread and display a loading indicator.

A possible thread-based approach is implemented in example/ink_runner.gd.

inkgd ships with a small editor plugin, which main purpose is to automatically recompile your ink file on each build.

Note: you will need inklecate installed somewhere on your system.

Navigate to "Project" > "Project Settings" and then, in the "Plugins" tab, change the status of the "InkGD" to "active".

A new panel should pop up on the right side of your editor. 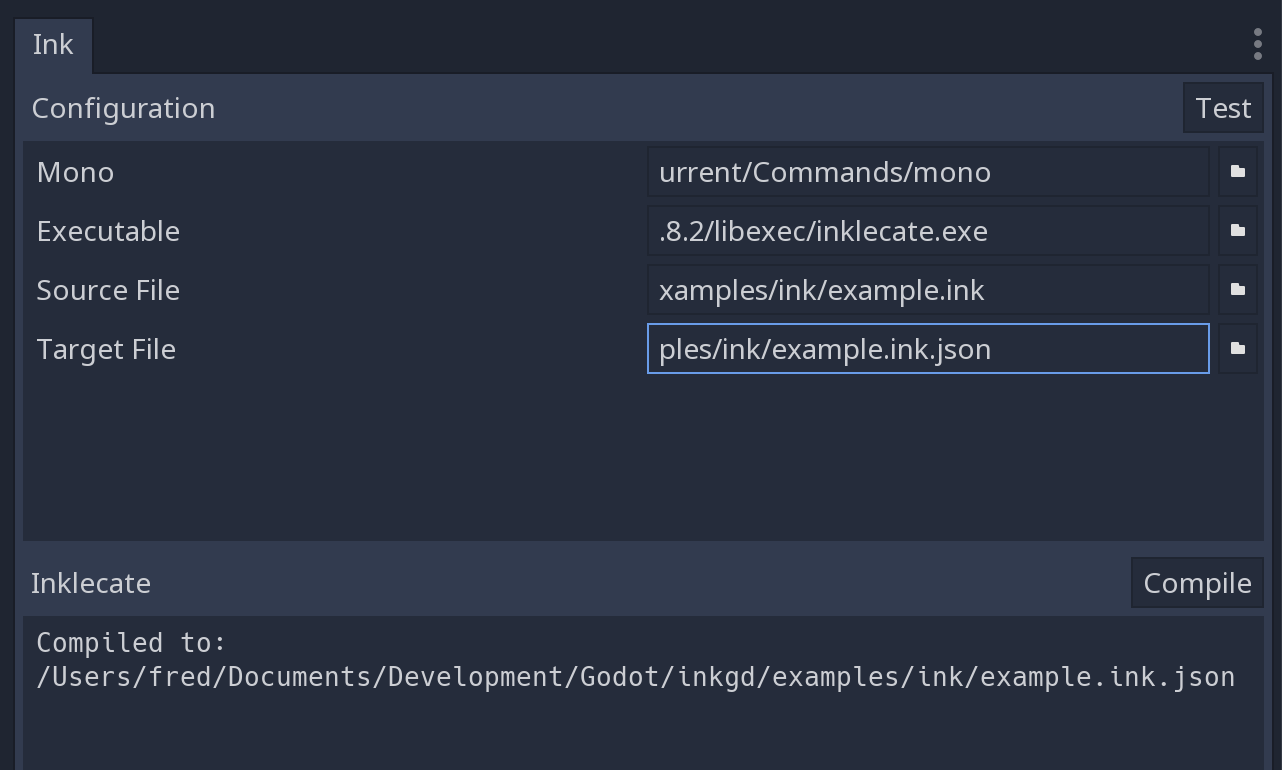 Here, you need to provide four (or three on Windows) different paths:

By clicking on "Test", you can test that the plugin can sucessfully run inklecate. You can also compile the story manually by clicking on "Compile".

The configuration is saved as two files inside the root directory of the project:

If you're working in a team, you may want to commit .inkgd_ink.cfg and keep .inkgd_compiler.cfg out of version control.

inkgd is released under the MIT license. See LICENSE for details.