Loading an image file into a GPU texture is outside of the scope of Dear ImGui and has more to do with your Graphics API. Because this is such a recurring issue for Dear ImGui users, we are providing a guide here.

This guide will have us load an image file from disk and display it in a Dear ImGui window. 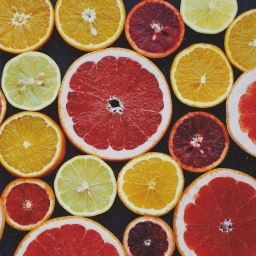 This is generally done in two steps:

Once you have an image in GPU texture memory, you can use functions such as ImGui::Image() to request Dear ImGui to create a draw command that your Dear ImGui rendering back-end will turn into a draw call.

(Note: Large games and applications are likely to be using texture formats that are compressed on the GPU or more advanced techniques that are outside of the scope of this article. Generally, if you are reading this you shouldn't need to worry or care about that.)

Rendering your game scene into a texture

This guide covers loading an image file from disk and turning it into a GPU texture. Another frequent use of textures is wanting to rendering your application/game scene into a texture and then display that texture inside a Dear ImGui window.

This is not covered by this guide, however you should first read this guide in order to get a better understanding of how texture works. Then you can look up resources about rendering to a texture, e.g.

Please note that many new C/C++ users have issues with their files because the filename they provide is wrong.

Two things to watch for:

In some situations, you may also use / path separator under Windows.

From the FAQ: "How can I display an image? What is ImTextureID, how does it works?"

The renderer function called after ImGui::Render() will receive that same value that the user code passed:

Once you understand this design you can begin understand that loading image files and turning them into displayable textures is not within the scope of Dear ImGui. This is by design and is actually a good thing, because it means your code has full control over your data types and how you display them. In reality, the concept of what constitute a "texture" is largely open-ended, and Dear ImGui doesn't want to narrow that concept. If you want to display an image file (e.g. PNG file) into the screen, please refer to tutorials above.

We will here use stb_image.h to load images from disk.

Load our texture after initializing OpenGL loader (for example after glewInit()):

Now that we have an OpenGL texture and its dimensions, we can display it in our main loop: 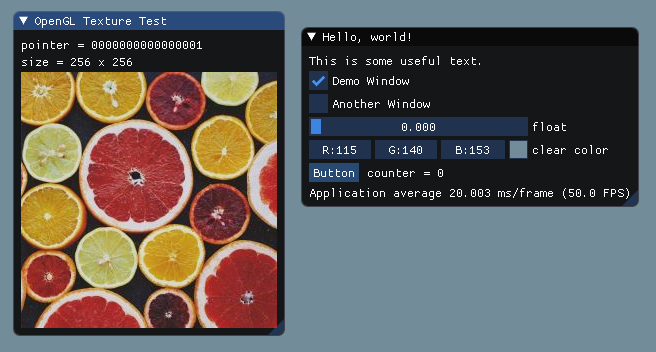 Unlike the majority of modern graphics API, DirectX9 include helper functions to load image files from disk. We are going to use them here, instead of using stb_image.h.

At initialization time, load our texture:

Now that we have an DirectX9 texture and its dimensions, we can display it in our main loop: 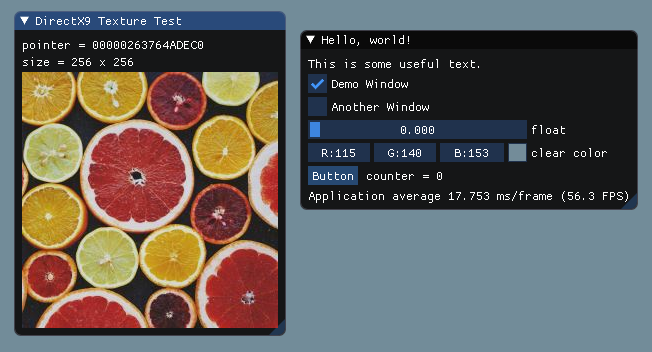 At initialization time, load our texture:

Now that we have an DirectX11 texture and its dimensions, we can display it in our main loop: 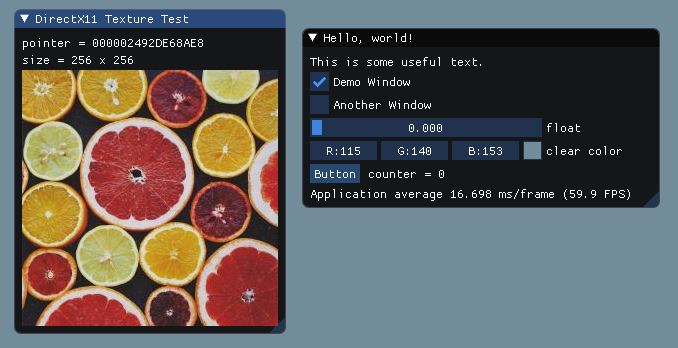 It should be noted that the DirectX12 API is substantially more complex than previous iterations, and assumes that you will be writing your own code to manage various things such as resource allocation. As such, it's a lot harder to provide a "one size fits all" example than with some APIs, and in all probability the code below will need modification to work with any existing engine code. It should however work if inserted into the Dear ImGui DirectX12 example project, with the caveat that the CreateDeviceD3D() function will need to be modified slightly to allocate two descriptors in the SRV resource descriptor heap as follows:

If you want to use this code to load more than one texture (and don't have your own mechanism for allocating descriptors), then you will need to increase NumDescriptors accordingly and also increment descriptor_index for each texture loaded.

The actual implementation itself is as follows - firstly, at the top of one of your source files add:

Then at initialization time, load our texture:

And finally now that we have an DirectX12 texture and its dimensions, we can display it in our main loop: 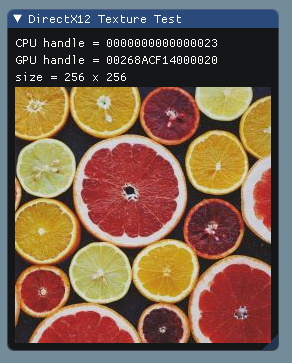 The ImGui::Image() and ImDrawList::AddImage() functions allow you to pass "UV coordinates" corresponding to the upper-left and bottom-right portion of the texture you want to display. Using the default values, respectively (0.0f, 0.0f) and (1.0f, 1.0f) for those coordinates allow you to display the entire underlying texture. UV coordinates are traditionally normalized coordinates, meaning that for each axis, instead of counting a number of texels, we address a location in the texture using a number from 0.0f to 1.0f. So (0.0f, 0.0f) is generally addressing the upper-left section of the texture and (1.0f, 1.0f) is addressing the lower-right corner of the texture. 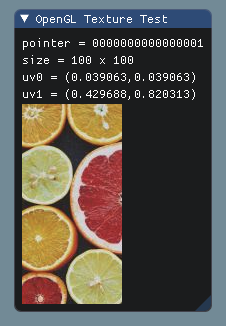 You can look up "texture coordinates" from other resources such as your favorite search engine, or graphics tutorials. Tip: map your UV coordinates to widgets (using SliderFloat2 or DragFloat2) so you can manipulate them in real-time and better understand the meaning of those values.

If you want to display the same image but scaled, keep the same UV coordinates but alter the Size: 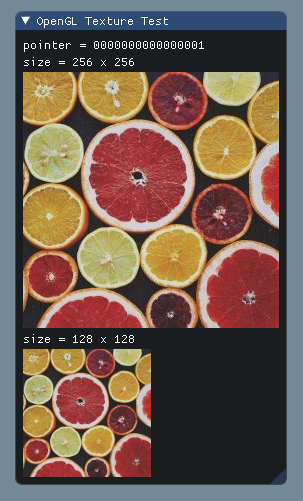