Flecs is a Fast and Lightweight ECS (Entity Component System). Flecs packs as much punch as possible into a small library with a tiny C99 API and zero dependencies. Here are some of the things it can do:

Additionally, flecs has a flexible engine that lets you do many things, like:

Make sure to check the flecs dashboard: 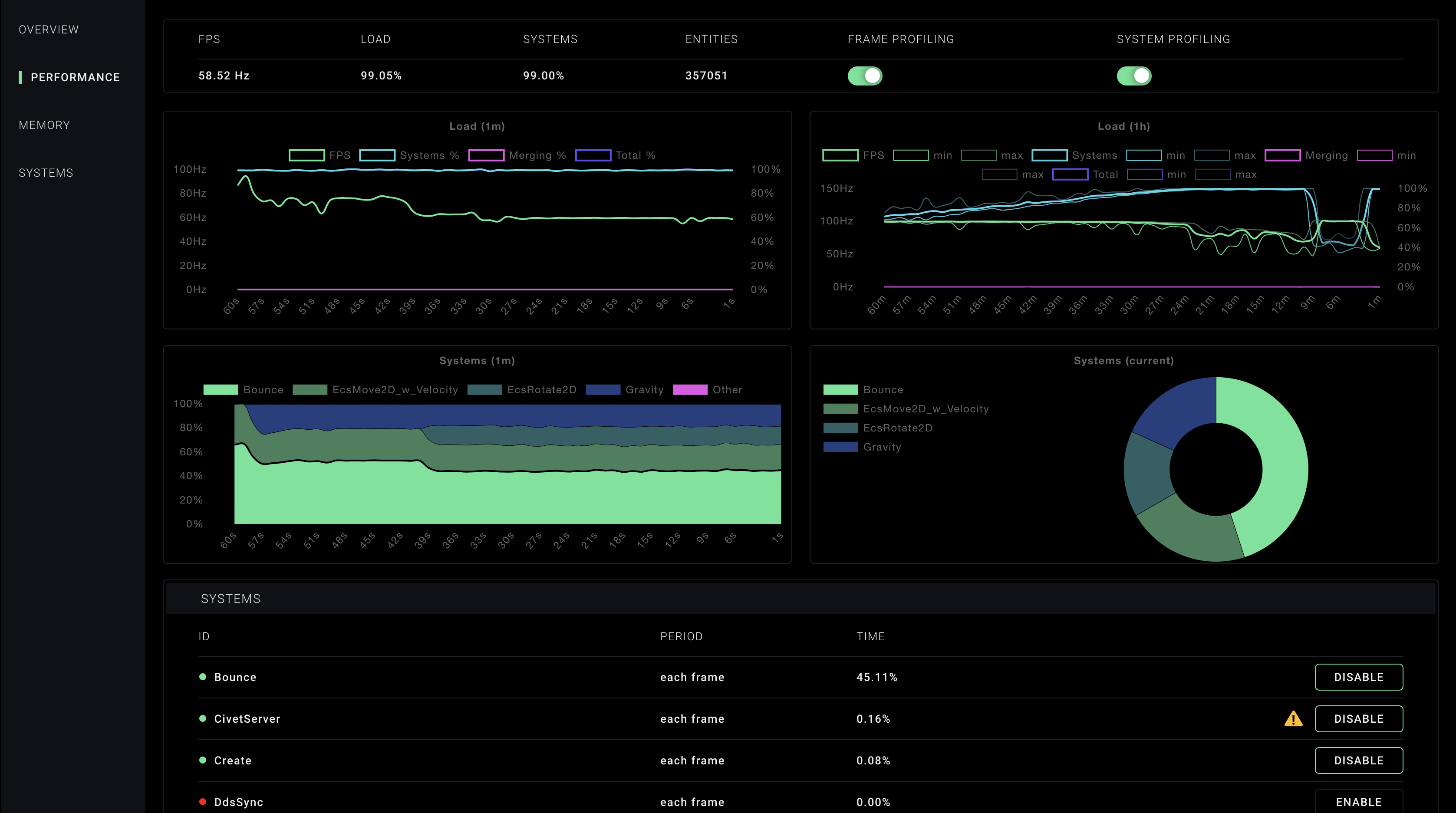 What is an Entity Component System?

ECS (Entity Component System) is a way to organize code that is mostly used in gaming and simulation projects. ECS code generally performs better than traditional OOP, and is typically easier to reuse. The main differences between ECS and OOP are composition is a first class citizen in ECS, and that data is represented as plain data types rather than encapsulated classes. A framework is an Entity Component System if it:

This is a simple flecs example using the C99 API:

For more examples, go to the flecs examples folder or the flecs-hub organization.

You can build flecs with either CMake, Meson, Bake or embed the sources into your own project.

To then install Flecs, do:

Most of Flecs can run without relying on operating system specific functionality. However, some features require threading and timing, amongst others. Out of the box, Flecs implements abstractions for these functions for common platforms. If you however want to run Flecs on a platform that is not implemented, you can easily provide Flecs with a platform specific set of functions through the OS API interface.

The OS API is an interface that contains function pointers for all the functions Flecs needs from the underlying platform which can be easily overridden by an application. These functions include support for:

This section of the manual describes how to override functions in OS API.

Flecs has optional modules which are created as bake packages. It is possible to use modules in a non-bake environment, but this is still a work in progress and likely requires manual labor.

If you want to use modules, but you do not want to use bake as the build tool for your own applications, the recommended way of accomplishing this is to first build Flecs and the modules with bake, and use the generated binaries with your own build system.

After building with bake, you will have a folder called bake in your home directory which contains binaries and include files. Depending on your operating system, you may need to set LD_LIBRARY_PATH (Linux), DYLD_LIBRARY_PATH (MacOS) or PATH (Windows) to the path where the libraries are stored.

You now have a project which contains a simple flecs application! To run the project, do:

Getting started with the dashboard

To create an application that uses the flecs web dashboard, first install the admin and civetweb modules:

Currently this is only possible out of the box with bake. Future versions may also support modules with CMake.

After cloning the packages, create a new project like so:

This creates a new flecs application. To now run your application with the dashboard, run it like this:

This runs the application, and passes --admin 9090 as its arguments. You can now navigate to http://localhost:9090 to see the dashboard. Any systems that you add to your application will now show up in the dashboard, and can be turned on/off.

An implementation of pong in flecs.

An intermediate application that demonstrates hierarchies and particle effects

Flecs has a growing ecosystem of modules. The following modules are currently available:

This section describes the high-level concepts used in flecs, and how they are represented in the API. Rather than providing an exhaustive overview of the API behavior, this section is intended as an introduction to the different API features of flecs.

A world is a container in which entities, components and systems can be stored and evaluated. An application can create any number of worlds. Data between worlds is not shared. If the application wants to share data between worlds, this has to be done manually. A world in ECS can be created with the ecs_init function:

An entity is an integer that uniquely identifies an "object" in a system. An entity may have 0..n components, and each component can be added only once. Entities can be created in flecs with the ecs_new function:

Components are datatypes that can be added to an entity. Any C datatype can be registered as a component within flecs. To register a component, you can use the ECS_COMPONENT macro, which wraps around the ecs_new_component function:

After this macro, you are able to add the Point component using ecs_add:

Additionally, the component can be added and initialized with the ecs_set function:

A system is logic (a function) that is executed for every entity that has a set of components that match a system's interest. In flecs, systems specify their interest, and when they should run. To define a system, you can use the ECS_SYSTEM macro, which wraps around the ecs_new_system function:

Systems can be enabled / disabled. By default a system is enabled. To enable or disable a system, you can use the ecs_enable function:

Entities in flecs may have an optional string-based identifier. An identifier can be added to an entity by setting the EcsId component, like this:

After a string identifier is added, the entity can be looked up like this:

Additionally, applications can define entities with the ECS_ENTITY macro, which automatically adds EcsId and initializes it with the provided name:

Components, systems, tasks, types and prefabs automatically register the EcsId component when they are created, and can thus be looked up with ecs_lookup.

To define a type, you can use the ECS_TYPE macro, which wraps the ecs_new_type function:

This defines a type called Circle that contains EcsCircle and EcsPosition2D. After this macro, you can use the Circle type with functions like ecs_add and ecs_remove:

A feature is a type that contains solely out of systems. To create features, use the ECS_TYPE macro or ecs_new_type function. This can be used to enable/disable multiple systems with a single API call, like so:

A useful property of features (types) is that they can be nested, like so:

A tag is a component that does not contain any data. Internally it is represented as a component with data-size 0. Tags can be useful for subdividing entities into categories, without adding any data. A tag can be defined with the ECS_TAG macro:

A container is an entity that can contain other entities. There are several methods to add a child entity to a container entity. The easiest way is with the ecs_new_child function:

Alternatively, you can add an entity to a container entity after its creation using ecs_adopt:

With the ecs_contains function you can check whether an entity contains another entity:

Prefabs are a special kind of entity that enable applications to reuse components values across entities. To create a prefab, you can use the ECS_PREFAB macro, or ecs_new_prefab function:

This defines a prefab with the EcsCircle and EcsPosition2D components. We can now add this prefab to regular entities:

Modules are used to group entities / components / systems. They can be imported with the ECS_IMPORT macro:

This will invoke the EcsComponentsTransform function, which will define the entities / components / systems. Furthermore, the macro will declare the variables to the entity / component / system handles to the local scope, so that they can be accessed by the code.

In large code bases modules can be used to organize code and limit exposure of internal systems to other parts of the code. Modules may be implemented in separate shared libraries, or within the same project. The only requirements for using the ECS_IMPORT macro is that the name of the module (EcsComponentsTransform) can be resolved as a C function with the right type. For an example on how to implement modules, see the implementation of one of the flecs modules (see above).

Modules can be imported multiple times without causing side effects.